In celebration of Singapore’s 50th anniversary of independence, The Private Museum is proud to present Influences and Friendships: A Chua Ek Kay Estate Collection. This special body of works offers a glimpse into Chua Ek Kay’s lesser-known art collection of prominent artists and friends, with 21 artworks in Chinese ink and Calligraphy, Oil and Woodcarving that reflects the inspirations and artists that influenced Chua in his artistic practice.

Highlights include Huang Binhong’s landscape painting paying its homage to the 10th century painter Juran, one of the great Master artists of early Chinese monumental landscape paintings. Huang Binhong (1865 – 1955), a painter and art theorist, was one of Chua’s biggest influences. Inspired by the endless possibilities of ink, Chua fervently explored the extent of his brushworks. The collection of works traces Chua’s Shanghai School lineage from Wu Changshuo (1844-1927), Wang Ge Yi (1897-1988) and Fan Chang Tien (1907-1987), and a combination of monk artists, Lingnan School and Chua’s contemporaries.

Through the visions from these artists and friends, the viewer is able to reach into the window of his art practice. The intertwining of creativities from around the world allowed Chua to create his inimitable style that incorporates a balance of both Western and traditional. 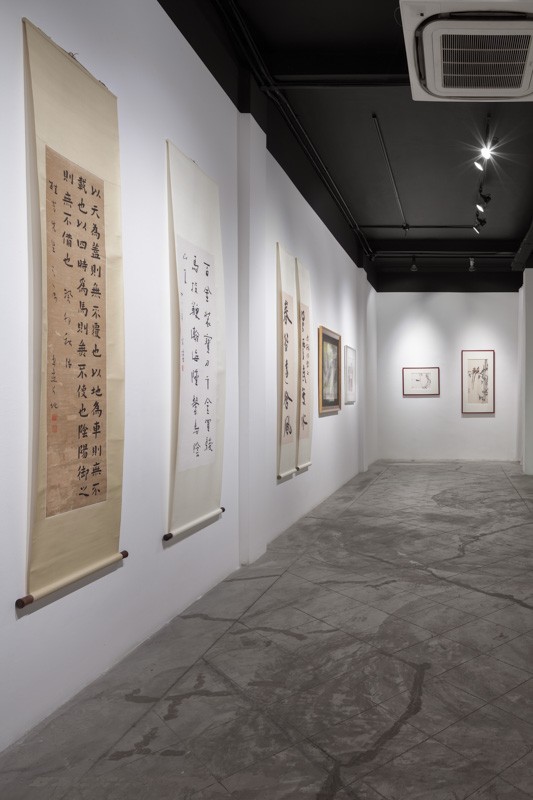 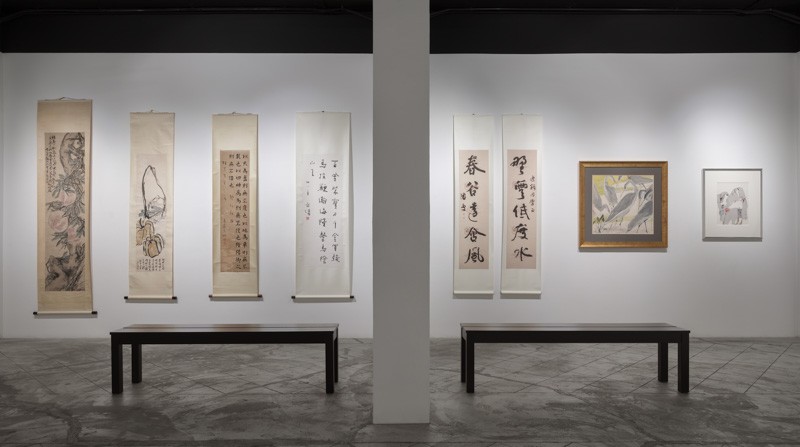 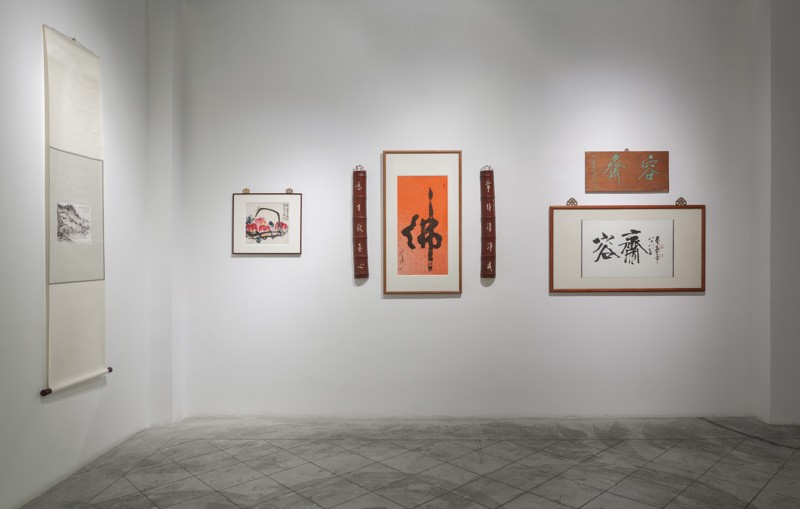 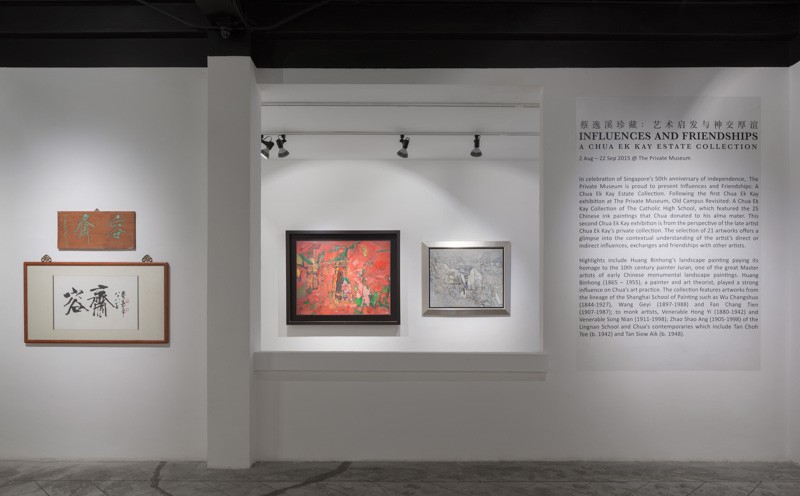 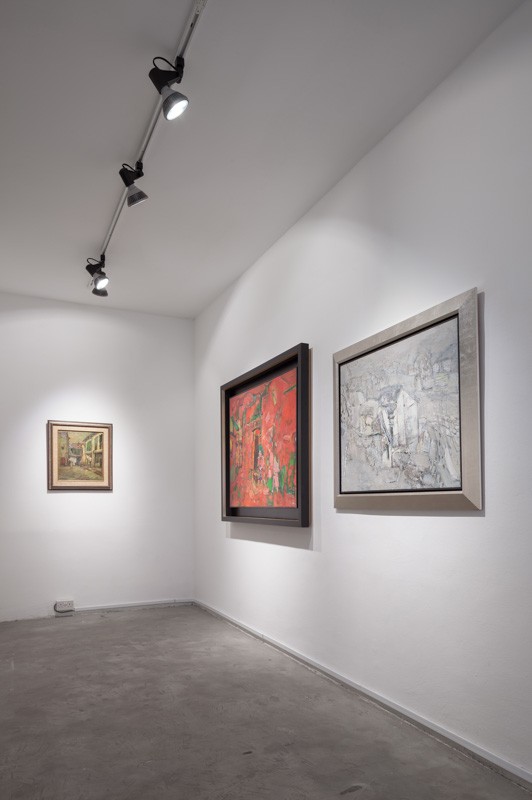 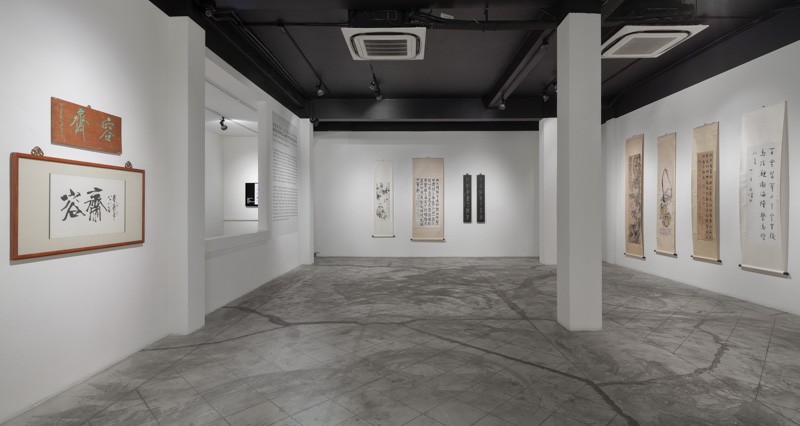 Dong Shou Ping was an artist whose art was closely associated with the fate of ink painting in 20th century China, one that was intertwined with cultural campaign tumult including the Great Leap Forward and the Cultural Revolution. Dong was one of the artists Zhou Enlai praised and after the Cultural Revolution, became a celebrated ink master in the rebirth of ink painting in the late 1970s. Dong was also a highly respected art expert and authenticator and conducted lectures on art history and connoisseurship in Japan and Hong Kong.

Born in Guangdong, China, Fan is an influential Chinese-Singaporean ink artist. Fan studied in the Shanghai Xin Hua Art College under the tutelage of Wang Geyi and was a second-generation disciple of the grandmaster of the Shanghai School of Painting, Wu Changshuo. Continuing the tradition of the Shanghai School, Fan went on to teach Chua Ek Kay, Tan Siow Aik and other important Singaporean artists.

Born in Tianjin, China, Hong Yi was a painter, calligrapher, seal cutter and art educator. Li studied at the Tokyo School of Fine Art in Ueno Park where he specialized in Western painting and music. Upon returning to China, Li went on to become an influential art education and later became the first Chinese educator to use nude models in his painting classes. In 1918, he was ordained as a monk; taking up his Buddhist name, Hong Yi. After entering monkhood, Hong Yi practised only calligraphy, developing a simple and unadorned, yet unique style.

Born in Zhejiang, China, Huang was a Chinese literati painter and art theorist. Huang was part of a generation of artists who modernized traditional brushwork and their fresh approach to composition. Renowned for his powerful brushwork, Huang became known by the sobriquets Huang of the South and Qi (Bai Shi) of the North. Huang has been the influences of many second-generation Singaporean artists, which include Chua Ek Kay and Lim Tze Peng.

Born in Fujian, China, Pan Shou was a leading figure in Chinese calligraphy and literature in Singapore. Trained in both kaishu (regular) and xingshu (running), Pan was also well versed in the archaic scripts of Qin, Han and Wei dynasties. In 1985, Pan was awarded the Gold medal at the Salon Artists Francais by the French Government in recognition of his artistic works; other accolades include the Cultural Medallion (1987), Meritorious Service Medal (1994) and ASEAN Cultural Medal (1997).

Born in Zhejiang, China, Pu Hua was a Chinese ink painter and calligrapher from the Shanghai School of painting in the late Qing Dynasty. Renowned for his depiction of bamboos, he was known to many as 蒲竹, loosely translated as Bamboo Pu. Pu was also widely regarded as one of the Four Talents of the Shanghai Style in the late Qing Dynasty alongside Xu Gu, Wu Chang Shih and Ren Bo Nian.

Born in Xiang Tan City of Hunan Province, Qi is the fifth son of influential Chinese Painter, Qi Bai Shi (1864 – 1957). He started learning Art from his father in 1944 and was a graduate from the Pu Ren University majoring in Art. In 1957, he became an art teacher in the Beijing Dong Cheng Primary School, China. Qi was the vice president of Beijing East Painting Research Centre.

Born in Hebei, China, Shi Hu is an internationally renowned Chinese artist who is most widely known for his Abstract Avant-garde style of painting. Shi Hu’s distinct style draws inspirations from the colors of the exotic culture and wildlife during his tours to Africa in 1978. His paintings have been exhibited worldwide in Jakarta, Taipei, Hong Kong and Switzerland.

Born in Jiangsu, China, Song was a highly regarded Chinese painter, calligrapher and Buddhist monk. Song received tutelage from renowned Southern calligrapher Xiao Tui’an and was well versed in poetry, calligraphy and painting. Song’s paintings are collected by many international institutions which include the Singapore Art Museum, National Palace Museum Taiwan and his calligraphies were presented as gifts to luminaries such as Japanese Emperor Hirohito and Chinese leader Deng Xiaoping and other political leaders.

Tan Choh Tee is a second generation Singaporean Artist known for his impressionist-style oil paintings of still life and landscapes. Tan graduated from the Nanyang Academy of Fine Arts where he studied under pioneer artists such as Chen Wen Hsi and Liu Kang. The Cultural Medallion recipient has exhibited at major international institutions, which include Klockner – Humboldt, Deutz A.G. Museum, Germany, Avant Garde Art Centre, Taiwan and the Korean National Cultural Research Organization.

Born in 1948, Tan is a Singapore based Chinese ink painter from the Shanghai School of Painting. In 1963, Tan sought tutelage under influential Chinese ink painter, Fan Chang Tien. His works were exhibited internationally at the University of Adelaide, Asia Pacific Triennial of Contemporary Art in Australia and in Beijing, China. Tan was also the previous president of the Hua Han Art Society in Singapore.

Born in Zhejiang, China, Tang Yun was a highly regarded Chinese ink painter and educator. Tang taught at the Xinhua Art Academy and was appointed the dean of the Chinese Painting Department at the Shanghai Fine Art Training School in the late 1930s. Tang was known for his use of traditional painting techniques, which he modernized and incorporated into lively works that were characterized by their focus on the natural environment. In 1999, the Tang Yun Art Museum was established in commemoration of him in Hangzhou, China.

Born in Beijing, China, Tsue was a calligrapher and art educator. Skilled in many calligraphic styles, such as kaishu (regular), lishu (clerical), caoshu (cursive), xingshu (running) and zhuanshu (seal). Tsue furthered his research of Chinese Calligraphy and Oracle Bone Inscriptions at the British Museum in 1953. Tsue has exhibited his works regionally in Malaysia, Thailand, Vietnam and Singapore. Tsue’s students include renowned calligraphers in Singapore such as Yong Cheong Thye and Goh Yao Kee.

Born in Jiangsu, China, Wang is one of the paragons of the Shanghai School of painting, Haipai Masters. Started out as a disciple of Wu Chang Shuo, Wang was versed in poetry, painting, calligraphy and seal carving. Wang has exhibited extensively in numerous international exhibitions in Japan, England and Germany. Wang also taught at the Xin Hua College of Art in Shanghai, whose students include Chen Wen Hsi, Fan Chang Tien, Liu Kang and others who later became Singapore’s pioneer artists.

Born in Zhejiang, China, Wu was a central figure in Chinese painting in the late Qing Dynasty. Wu has been regarded as the forerunner in the use of “Western Red”; a tone of red introduced from the west and is largely responsible for rejuvenating the genre of Flower-and-bird painting. Wu influenced the trend in painting that belonged to a Chinese artistic movement known as the Shanghai School of painting. Widely regarded as the grandmaster of the movement, Wu’s disciples included, Wang Geyi, Wang Yiting, Zhu Wenyun and Pan Tianshou.

Born in Jiangxi, China, Xu is an established contemporary Chinese artist known for his dream-like depictions of architecture and landscapes. Graduated from the China Central Academy of Fine Arts, Xu is currently the President of Jiujiang Art Association and the Director of Jiangxi Oil Painting Art Committee in China.

Born in Zhejiang, China, Yu was a calligrapher and art educator. In 1923, Yu arrived in Singapore and taught in the Chinese High School for over 20 years. Yu’s calligraphy has been exhibited extensively in the region, including Brunei, Malaysia, and Singapore. Yu has also exhibited alongside Xu Beihong in India.

Born in Guangdong, China, Zhao was a renowned Lingnan painter and art educator. In 1930, Zhao founded the Lingnan Art Studio in Guangzhou and later re-established the studio in Hong Kong in 1948. Zhao was accorded professorship at the National Central University and the National Art Academy in China. Zhao was awarded the gold medal at the Brussels ‘Guangzhou (1930) and had exhibited internationally in Paris, Rome, Hong Kong and the USA. Zhao’s works are widely collected by public institutions such as Hong Kong Museum of Art, Metropolitan Museum of Art, USA and the Ashmolean Museum, England.