From Lost Roots To Urban Meadows 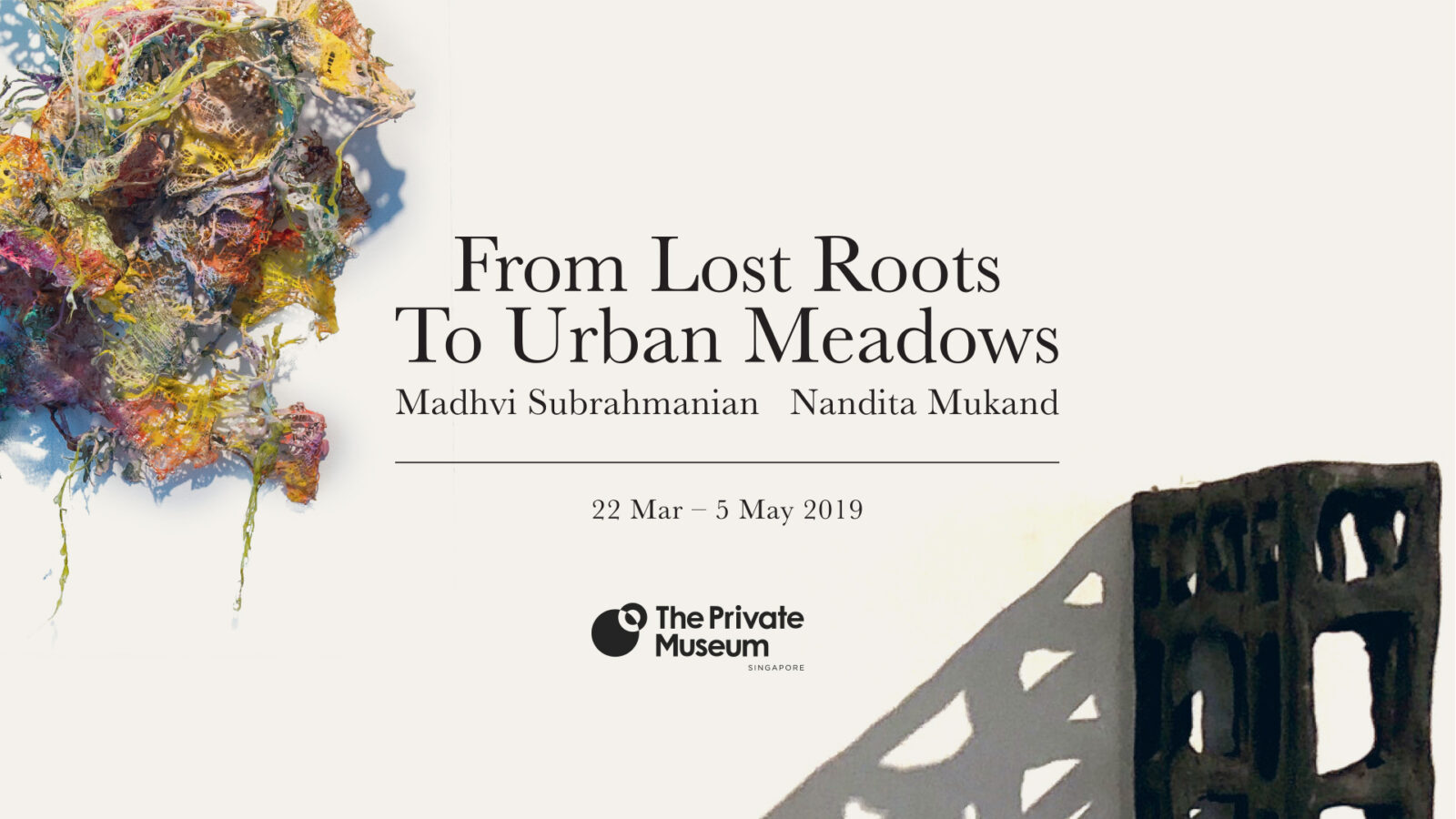 From Lost Roots To Urban Meadows

In celebration of International Women’s Day 2019, The Private Museum (TPM) is pleased to present From Lost Roots to Urban Meadows by Singapore-based artists, Madhvi Subrahmanian and Nandita Mukand. As part of TPM’s Women Artists series, this joint exhibition follows the most recent developments of the artists’ practices, featuring installation and sculptural works informed by their ongoing explorations into nature and how it responds to our everyday life in the city.

Subrahmanian reflects on the fluid interconnectedness of nature and urban cultures. Bringing together conceptual and sensory experiences, her works are often participatory and/or immersive in nature. Her contemplative process attempts to trace the imprints of the intangible through her investigations into city structures, space layouts, archaeological sites and the displacement of objects by shape-shifting shadows. Drawing upon her interest in metaphysics and its abstract concepts such as being, knowing, identity, time, space; and neuroplasticity, Mukand’s practice observes the deep intricacies of nature, mingled and merged with the working of the urban mind. Through the amalgamation of synthetic and organic materials, her works ruminate upon citified mindsets and illuminate urban veils that separate us from nature.

Through the inquisitive lens of both the artists, From Lost Roots to Urban Meadows seeks to challenge our perceptions of nature and life – inviting the viewer to delve deeper and engage in new conversations about our urban existence—with or without—nature. 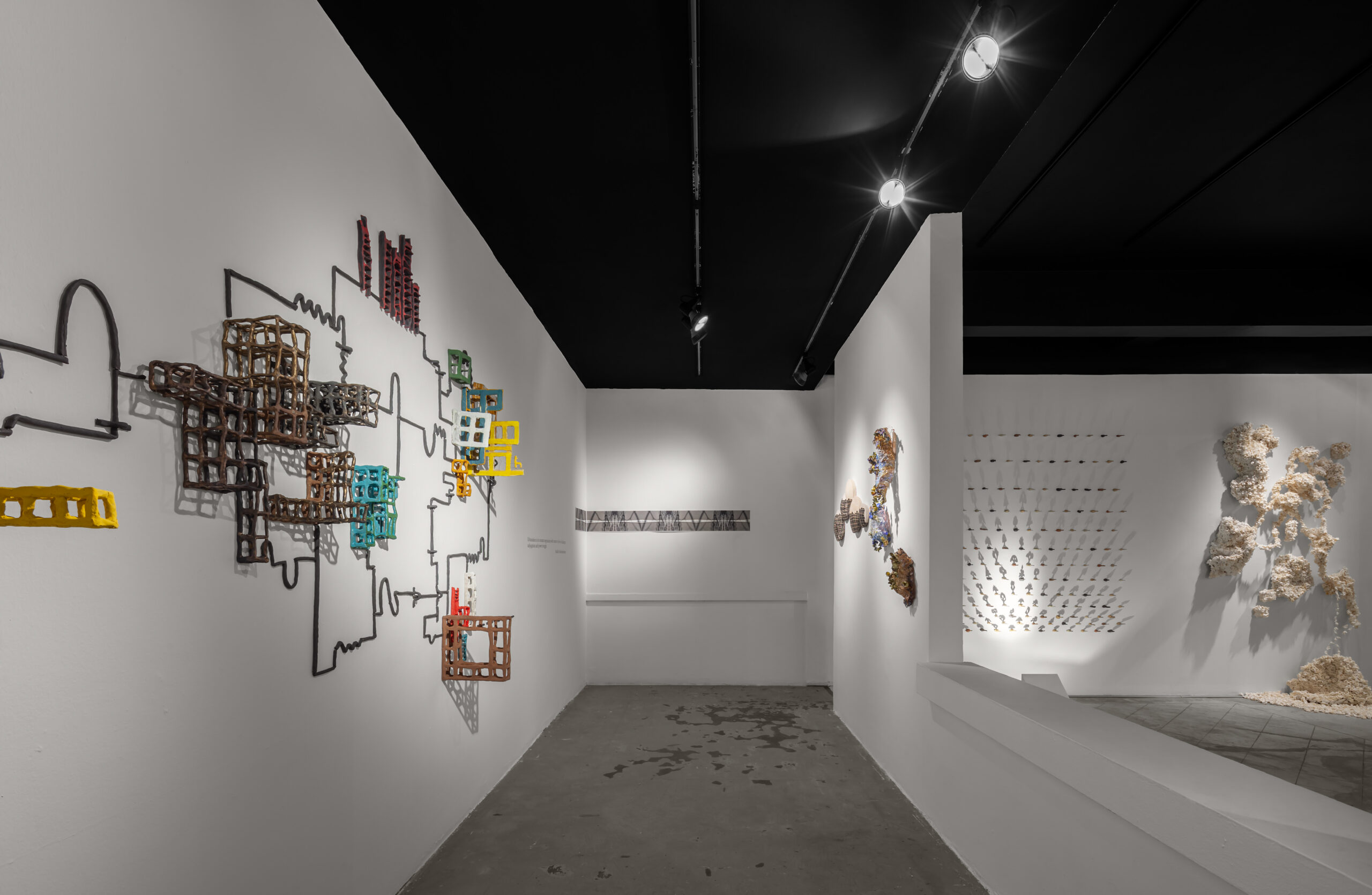 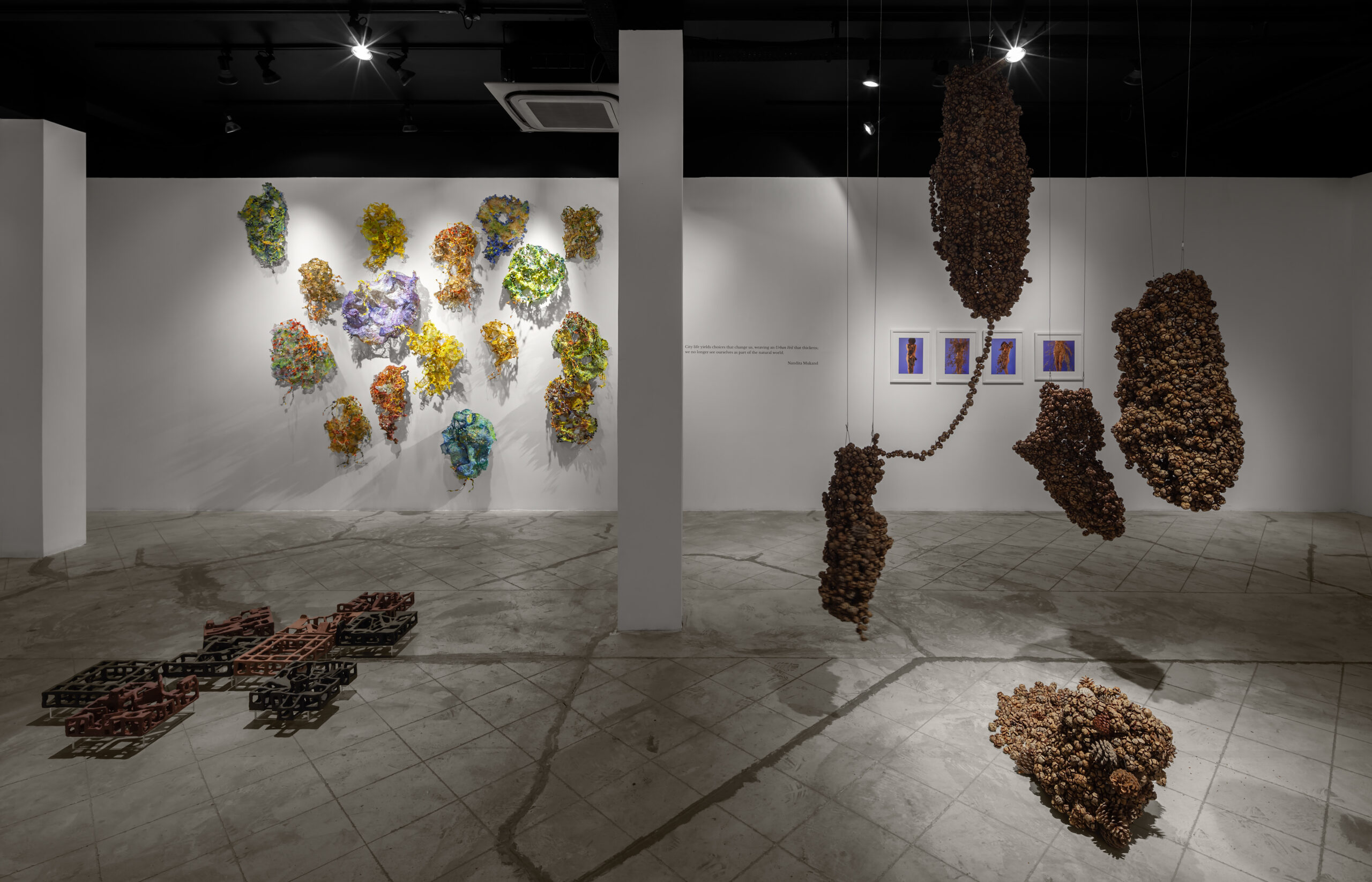 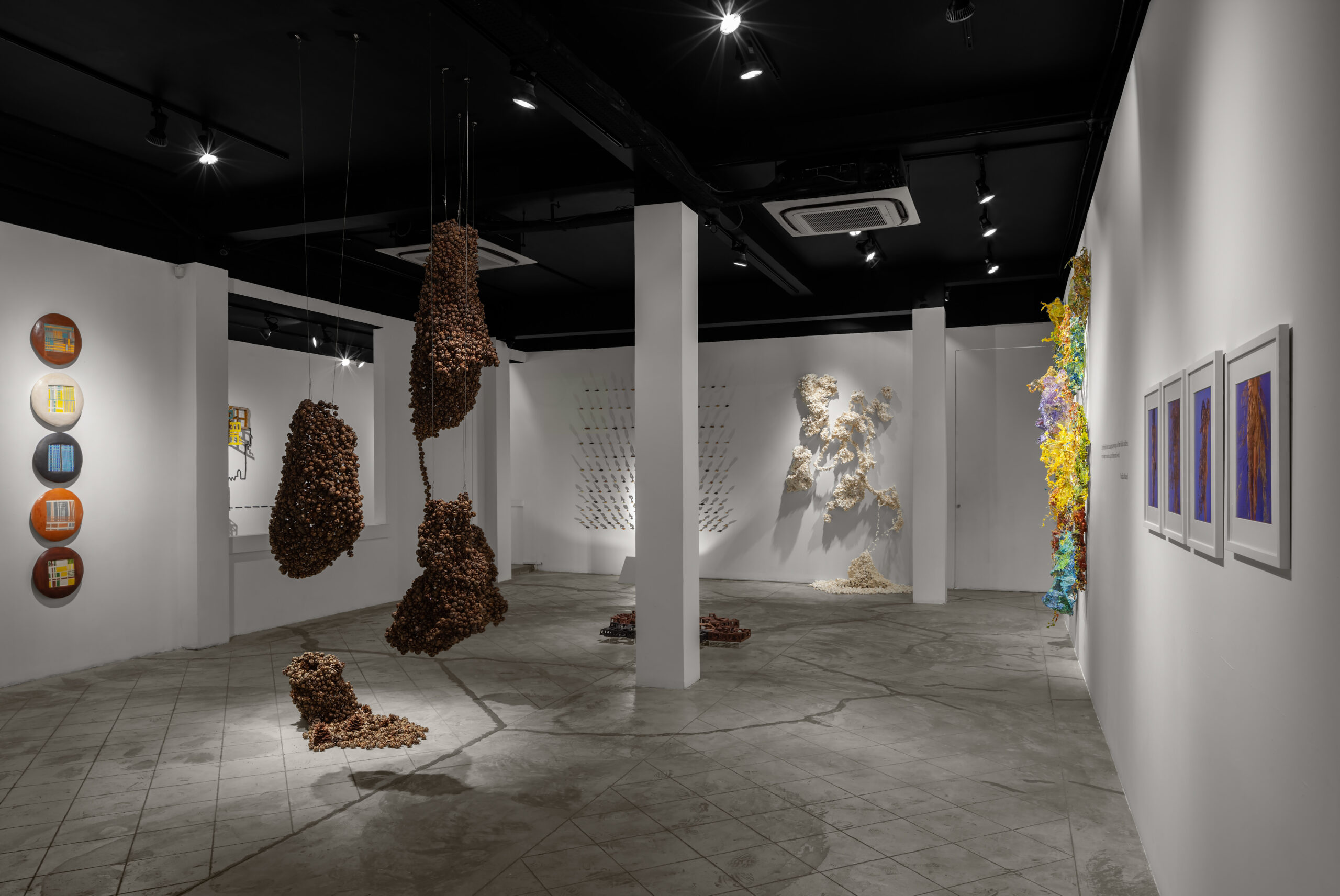 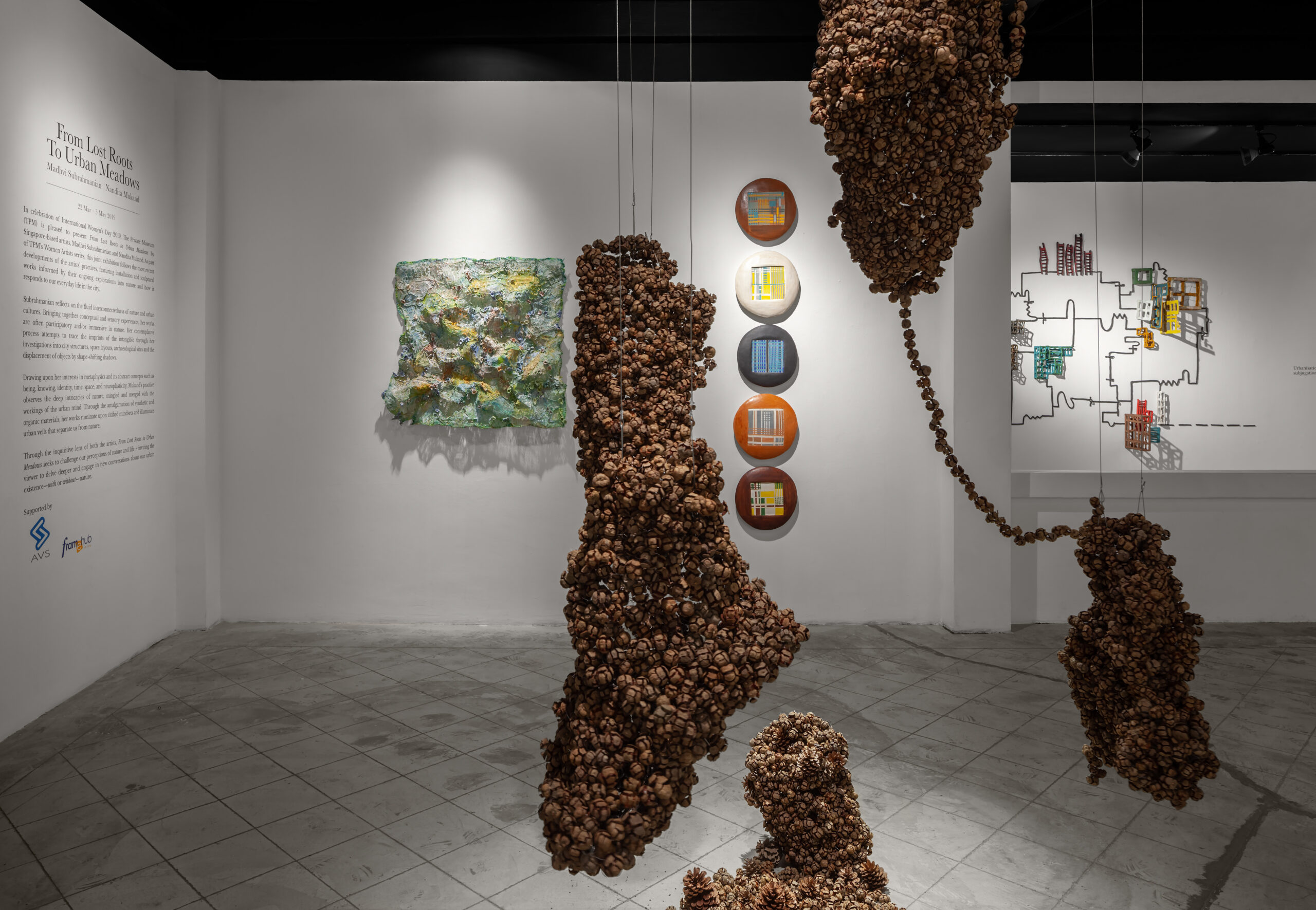 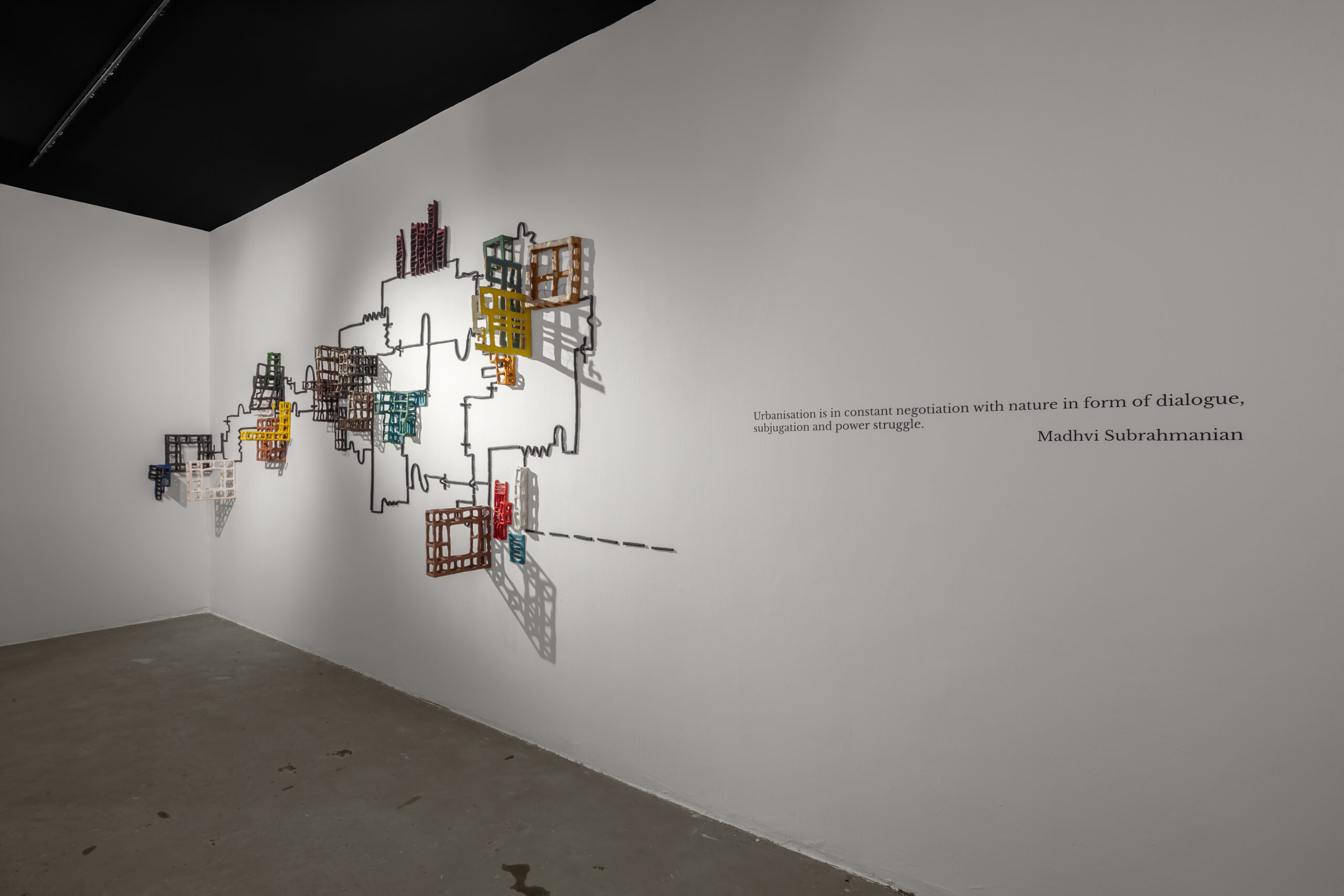 Based in Singapore, Madhvi Subrahmanian is an artist, curator and writer. Her initial training in ceramics was with Ray Meeker and Deborah Smith at the Golden Bridge Pottery in Pondicherry India and she has attained her Masters in Fine Arts from Meadows School of the Arts, Dallas, TX.

Madhvi has been awarded the Charles Wallace Grant and other grants including the India Foundation of the Arts. She has been invited to several artists in residence programs in Japan, China, Korea, India, Thailand and US. Her sculptures and installations can be seen in several private and public collections such as the Mumbai Domestic Airport, India, Shigaraki Ceramic Sculptural Park, Japan, and Fule museum in Fuping, China. She shows with Gallery Chemould in Mumbai and has participated in many biennales, solo and group exhibitions around the world. Her works have been shown at museums such as Indian Heritage Centre, Singapore, Yingee Ceramic Museum in Taiwan, Ayala Museum in Manila and Henan Museum in China.

Madhvi is part of the curatorial team for the first international contemporary ceramic triennial recently held in Jaipur. Her works have been published in international magazines, like Ceramic Art and Perception, Nueve Keramik and in books like Smoke firing by Jane Perryman and Contemporary Ceramics by Emmanuel Cooper. Madhvi’s work was also recently on the cover of India’s premier contemporary art magazine-Art India. Madhvi is the elected member of the International Academy of Ceramics (UN organization) based in Geneva. Recently her installation Ode to the Unknown based on colonial rubber plantations and labour politics was commissioned and acquired by a Singapore museum, Indian Heritage Center, Singapore.

Nandita Mukand is a Singapore based artist whose practice encompasses sculpture, installation and painting and whose work has been exhibitted and collected in Singapore and internationally. Drawing upon her interest in metaphysics, neuroplasticity, quantum physics and contemporary buddhist texts her work often mingles observations of growth and decay in the wilderness with the workings of the urban mind.

She has been awarded artist residencies by the Fundacio L’Olivar in Spain, the Hawkesbury Regional Gallery, Australia and the Bilpin International Ground for Creative Initiatives, Australia, all of which have enabled her to deepen her research into the natural world. Having quit a successful corporate career with Proctor and Gamble to devote herself full-time to art making, Nandita graduated with a Bachelor of Fine Arts (First Class) from Goldsmiths, College of London via LASALLE College of the Arts, Singapore. She received the LASALLE Award for Excellence for outstanding student of the year (2014). Nandita is also an alumna of the Indian Institute of Management, Calcutta and has a degree in Electronics Engineering.

In conjunction with the launch of the exhibition catalogue, Madhvi Subrahmanian and Nandita Mukand will share a dialogue about their practices and the themes presented in the exhibition. Participants of the talk will get the opportunity to speak with the artists and understand the processes behind their works. 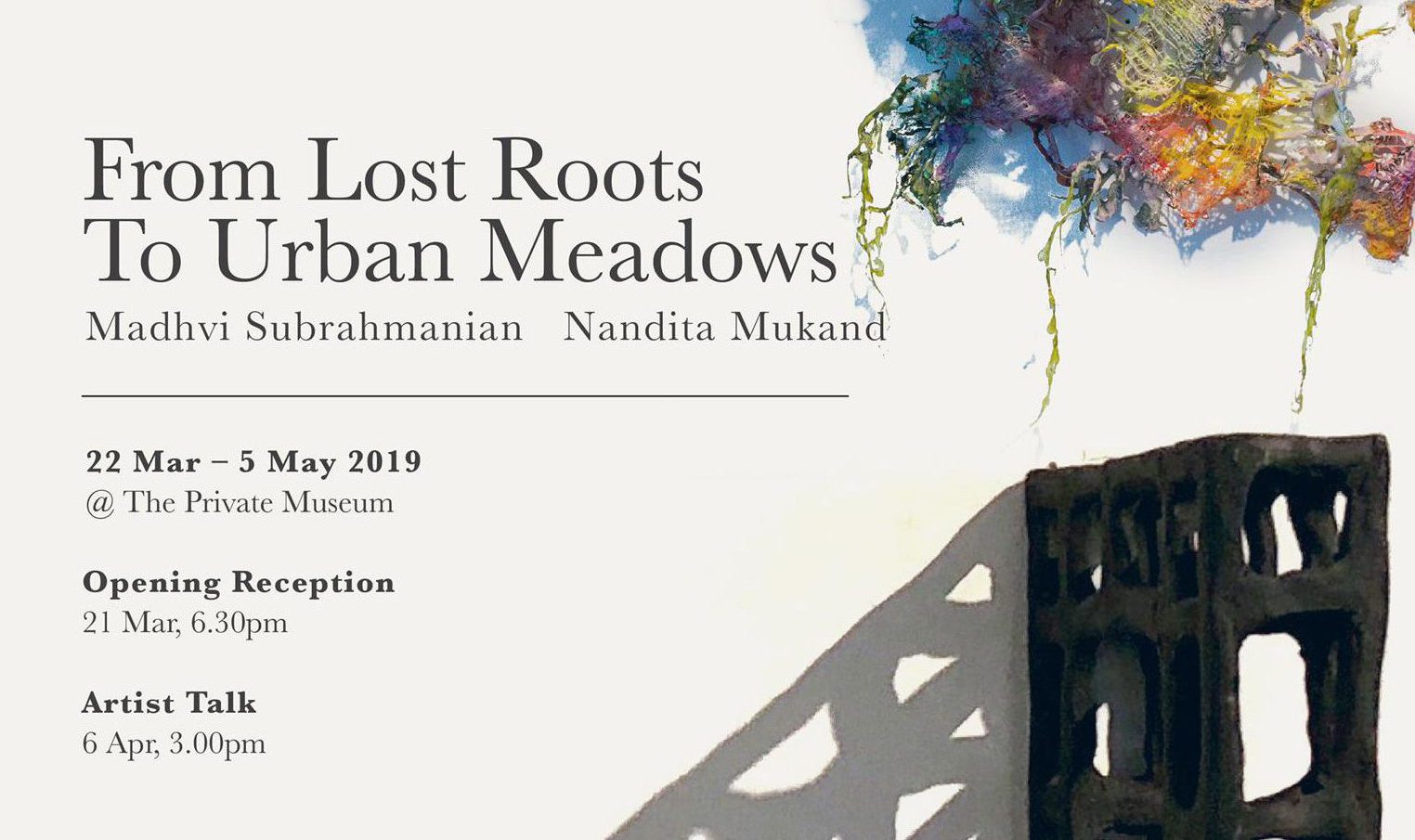 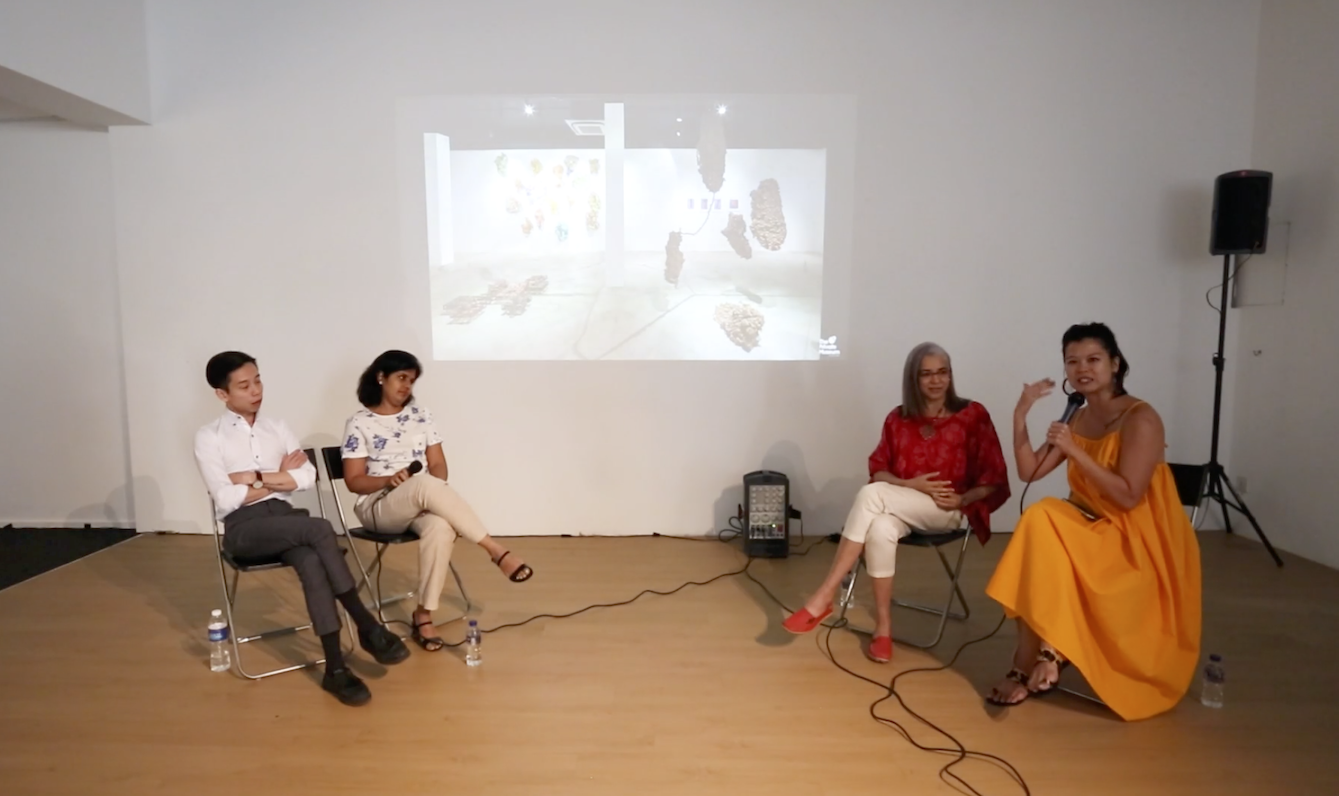 The From Lost Roots To Urban Meadows exhibition publication features an essay by Andrea Fam. 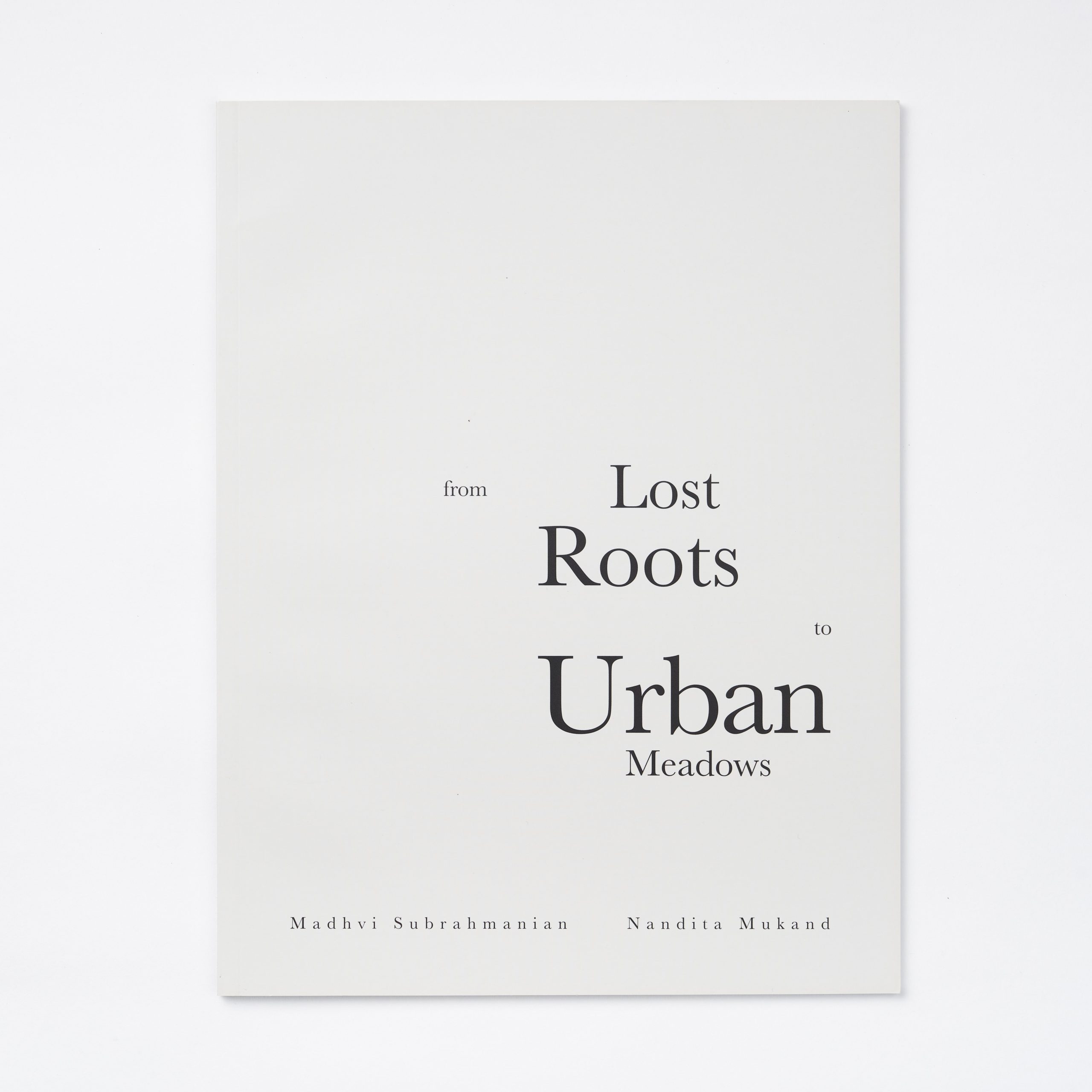 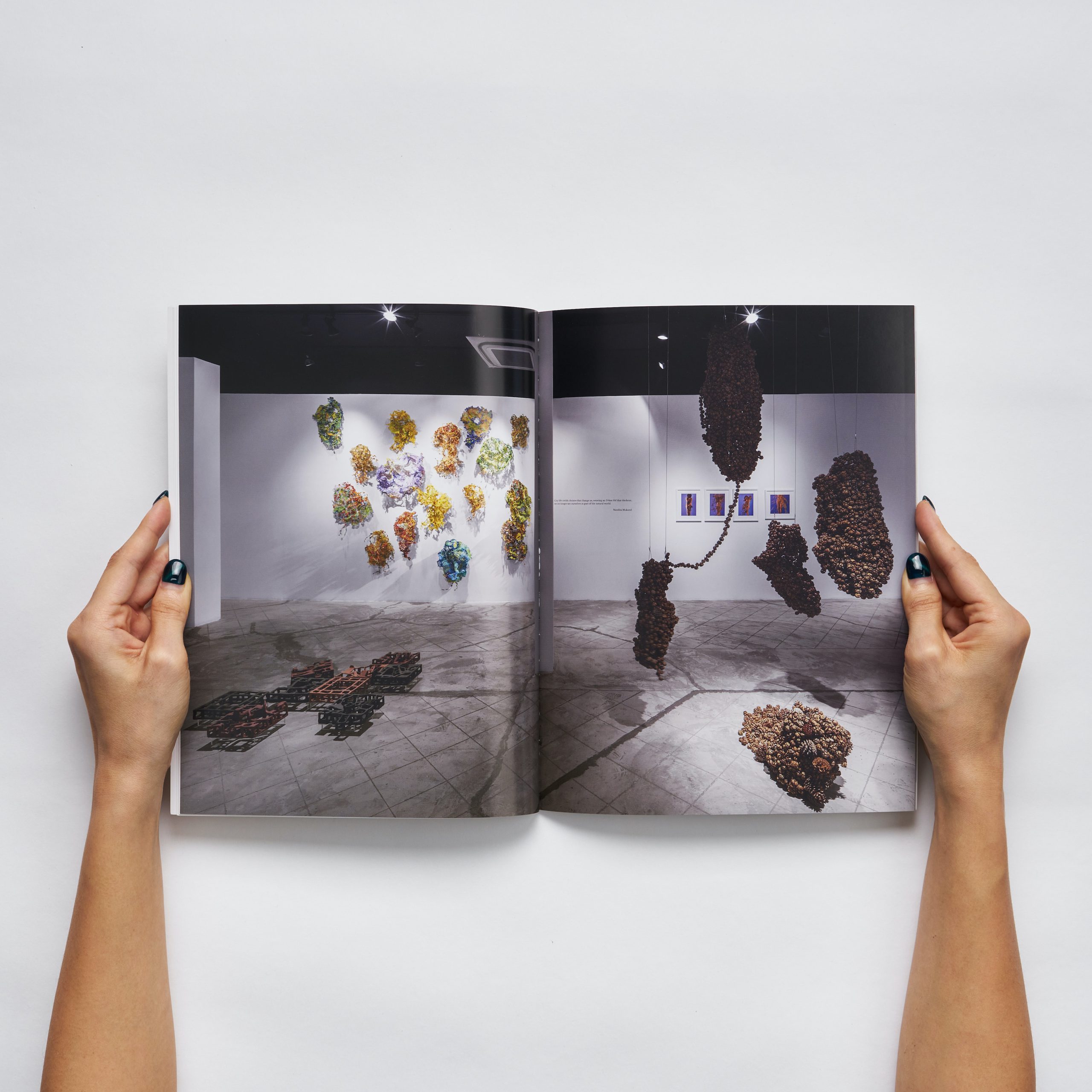 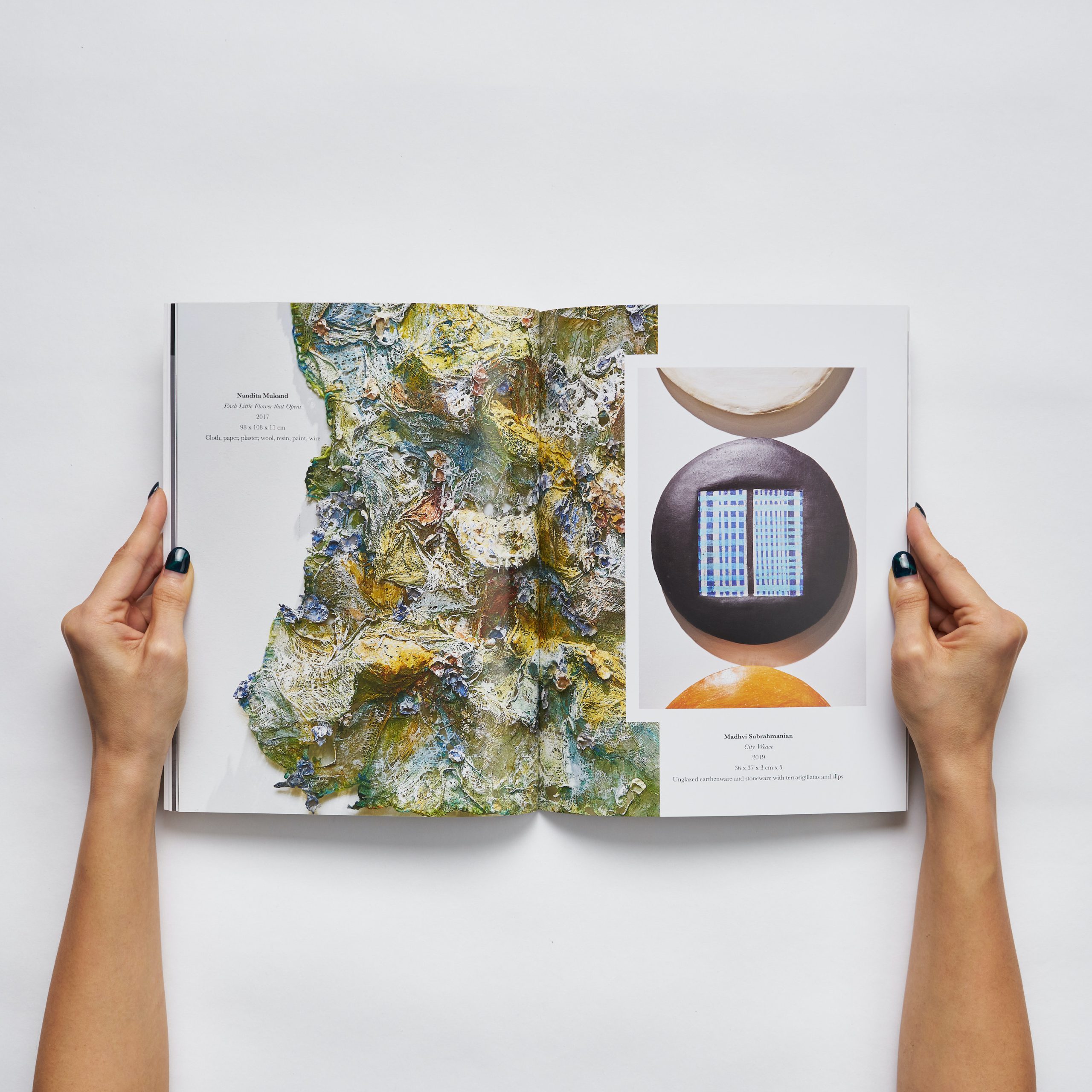 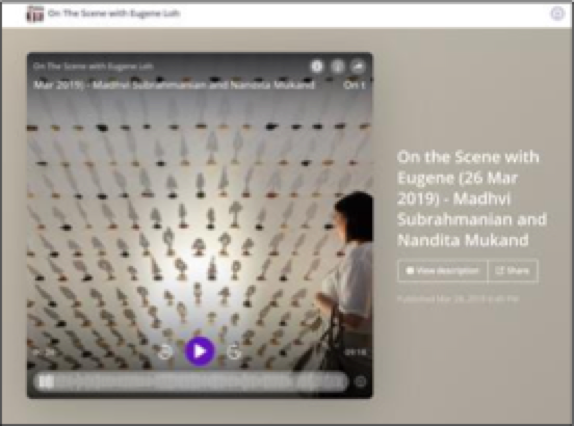