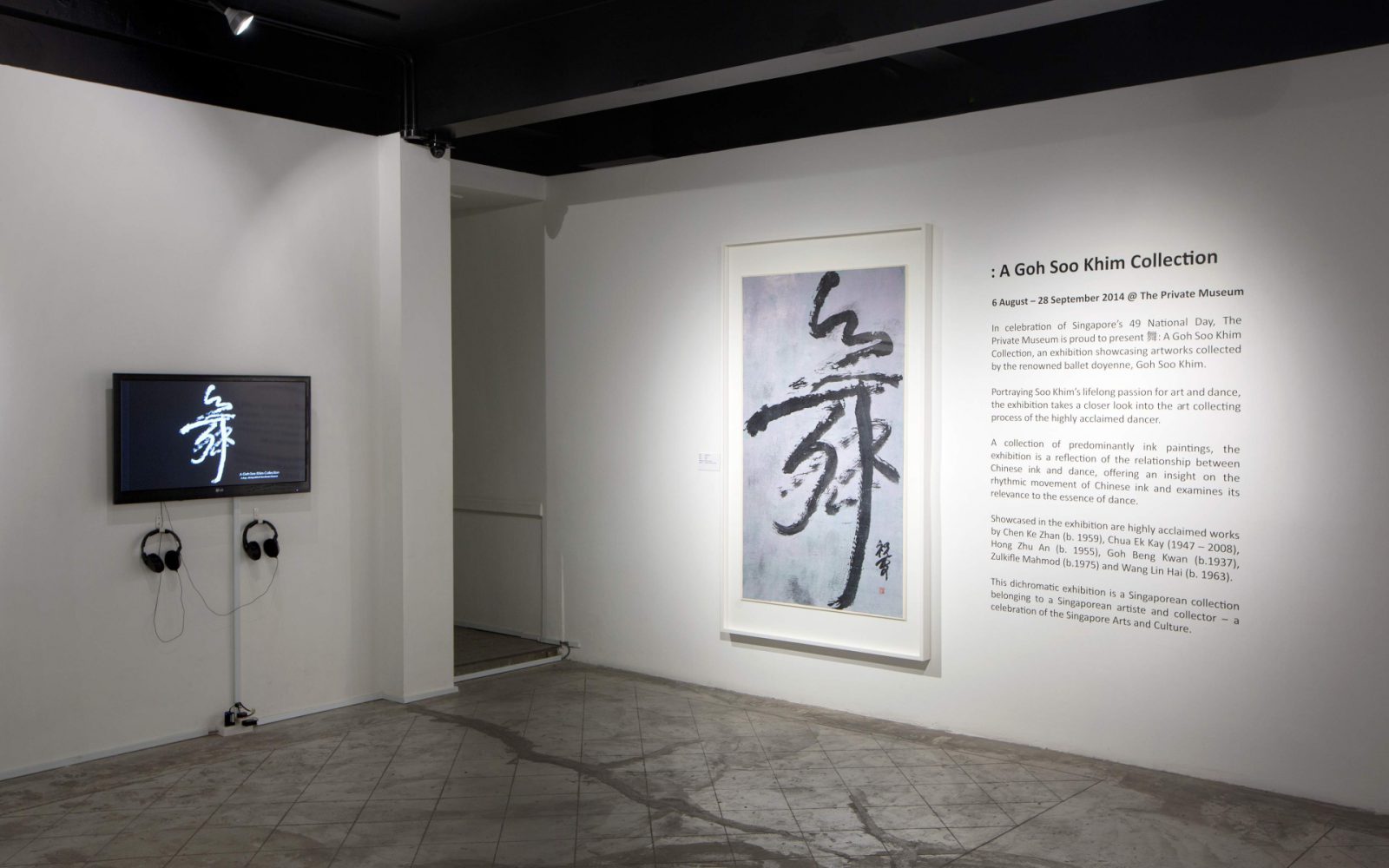 As part of the 49th National Day Celebrations, The Private Museum presents 舞: A Goh Soo Khim Collection, an exhibition showcasing the works collected by celebrated Singaporean ballet doyenne Goh Soo Khim. She has played a significant role in the development of dance in Singapore and has always been an avid art collector.

Evocative of the beauty and raw emotion of dance, this exhibition features eleven black and white artworks and a sound piece by Singaporean artists Chen Ke Zhan (b. 1959), Chua Ek Kay (1947 – 2008), Goh Beng Kwan (b.1937), Hong Zhu An (b. 1955), Zul Mahmod (b. 1975) and China artist Wang Lin Hai (b.1963). The collection is an expression of Soo Khim’s passion for the dualism of rhythm and movement, the very essence of dance. This dichromatic exhibition encapsulates the beauty and raw emotion of dance, extending beyond the dance stage and to the world of art. 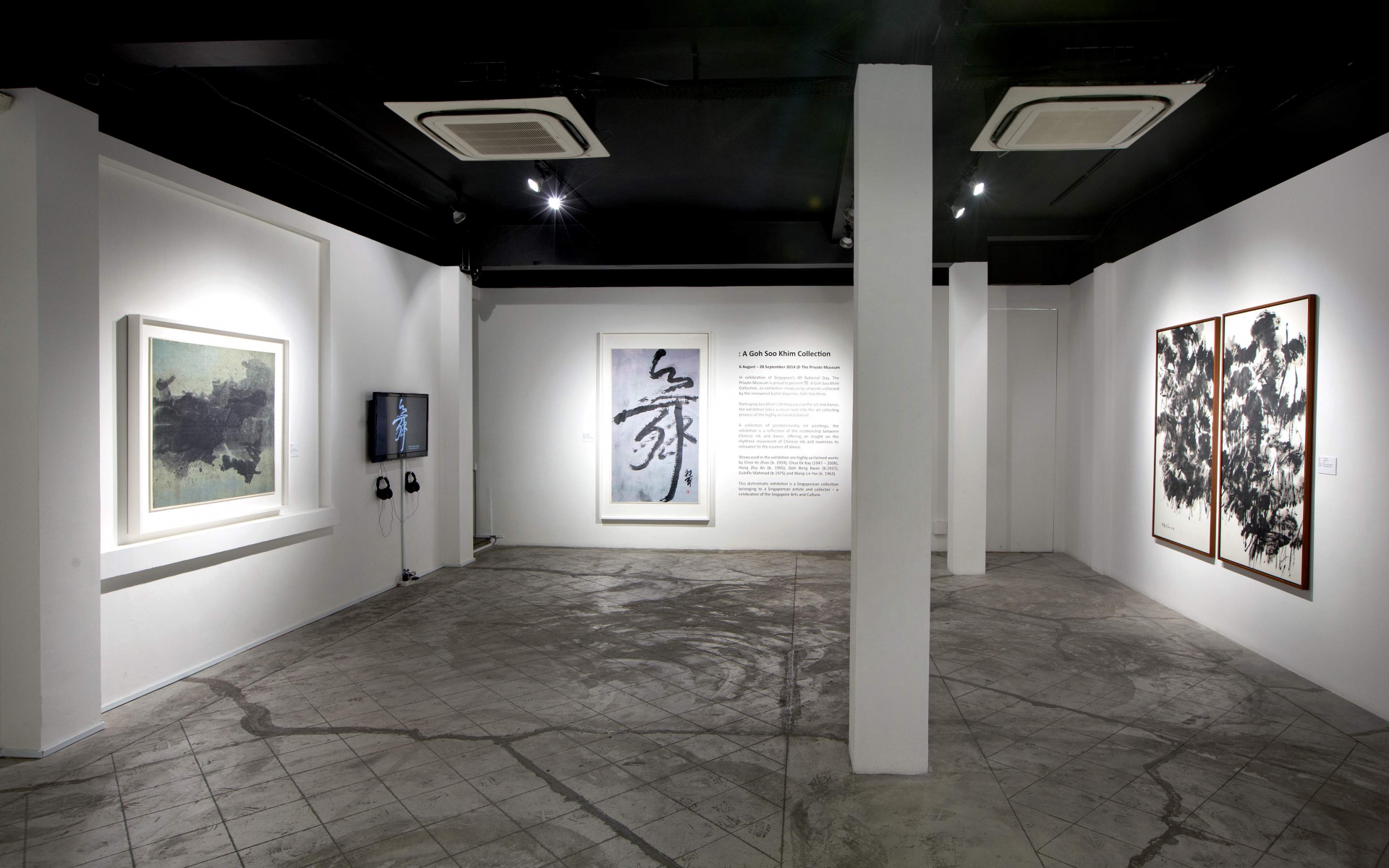 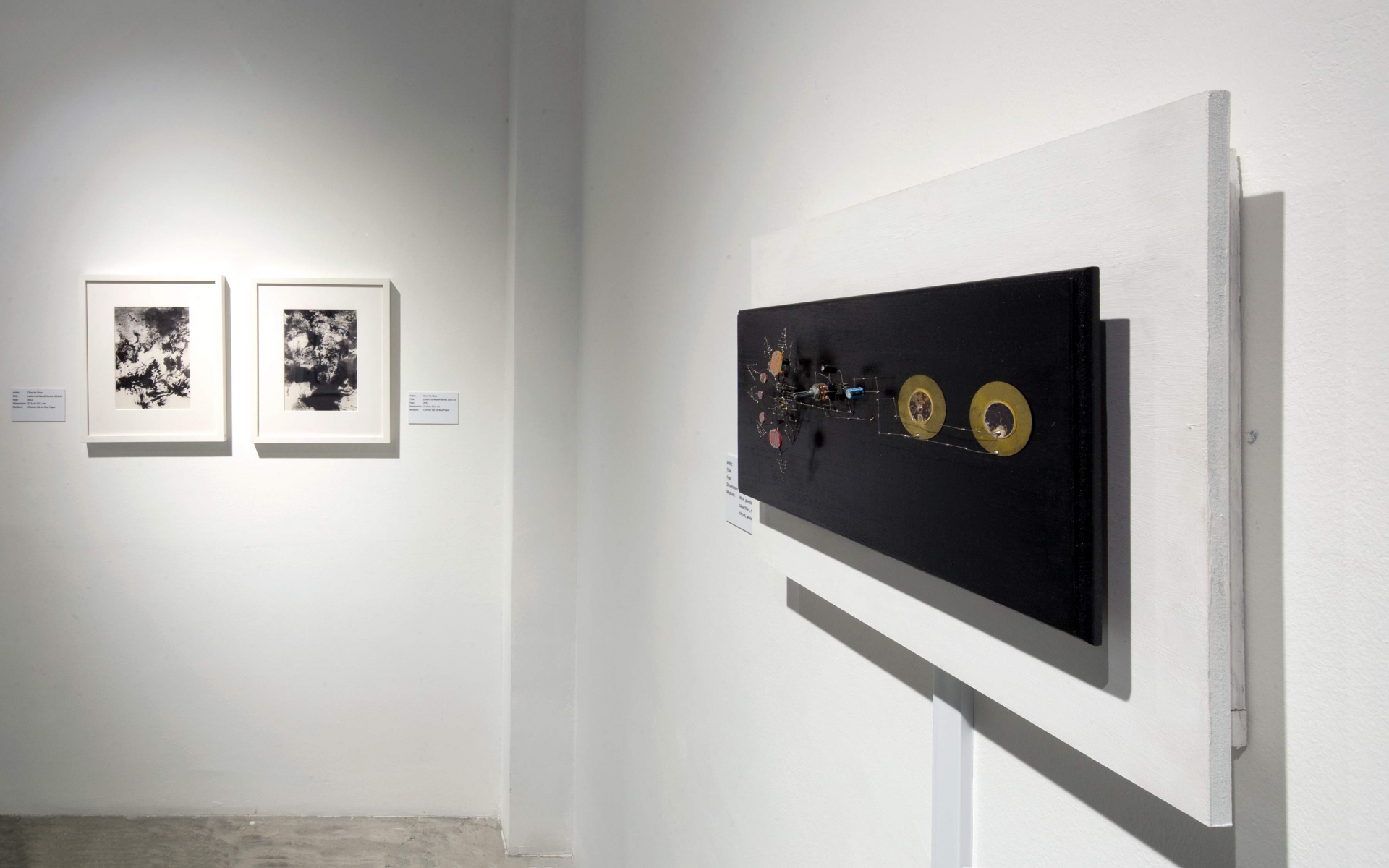 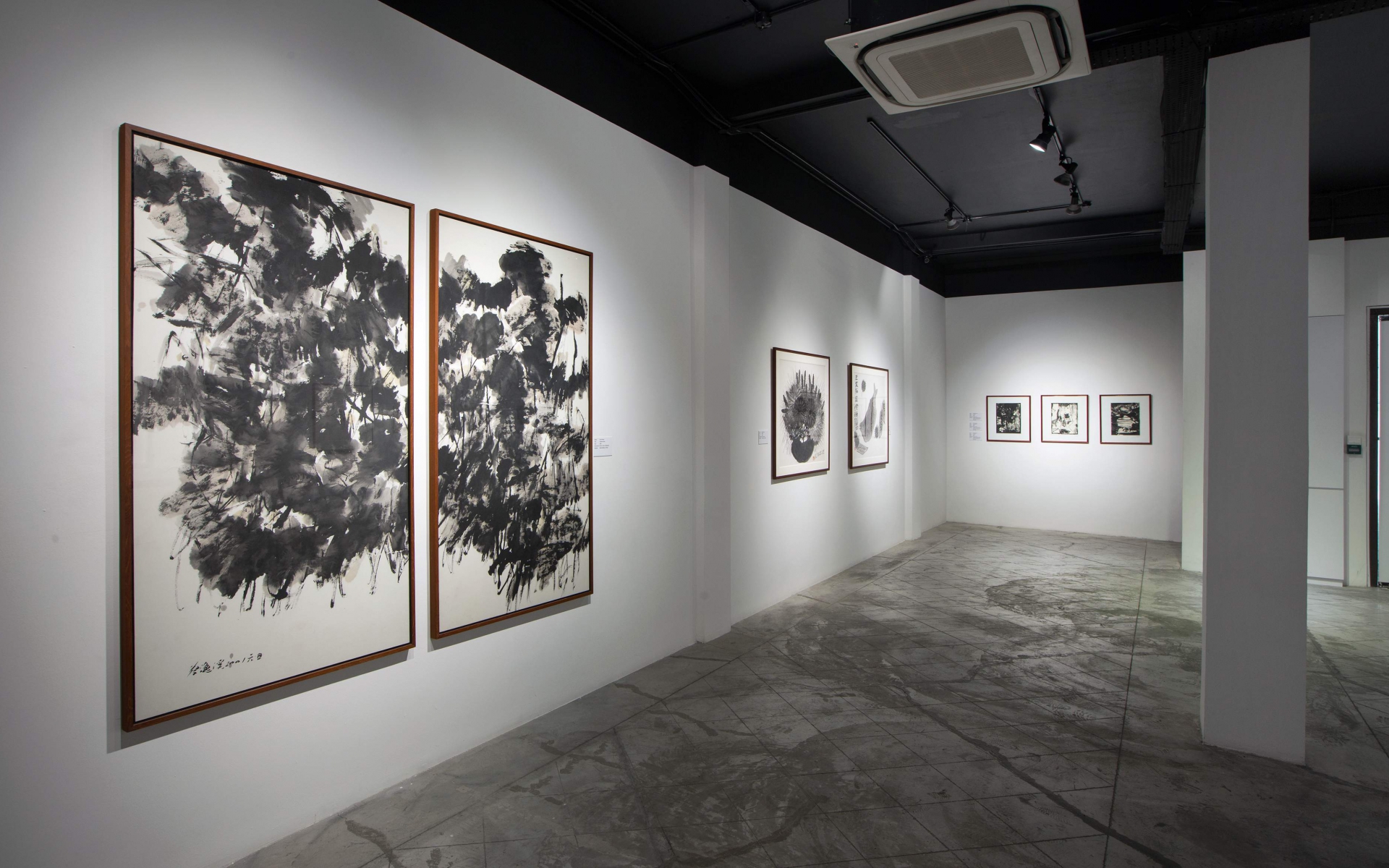 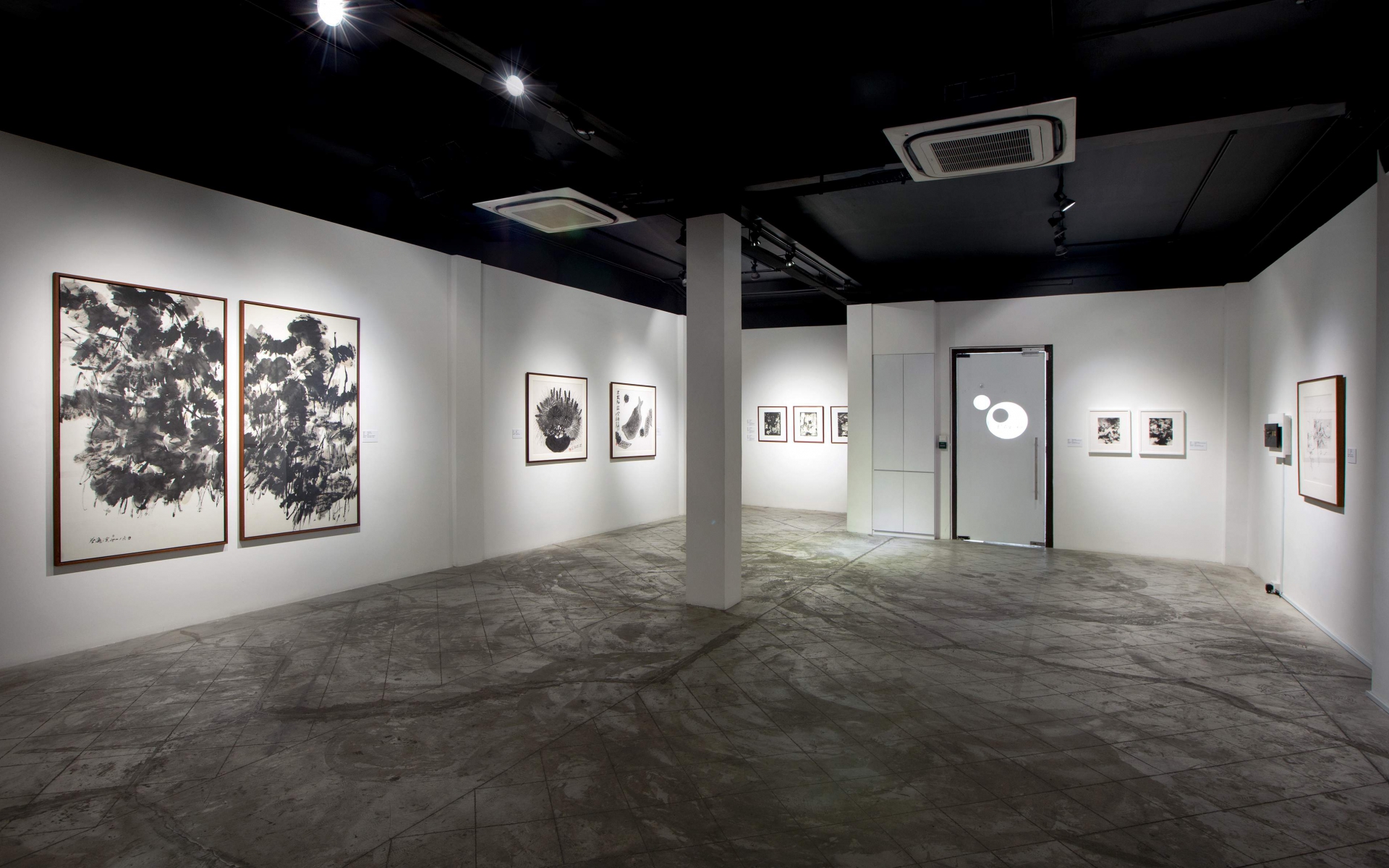 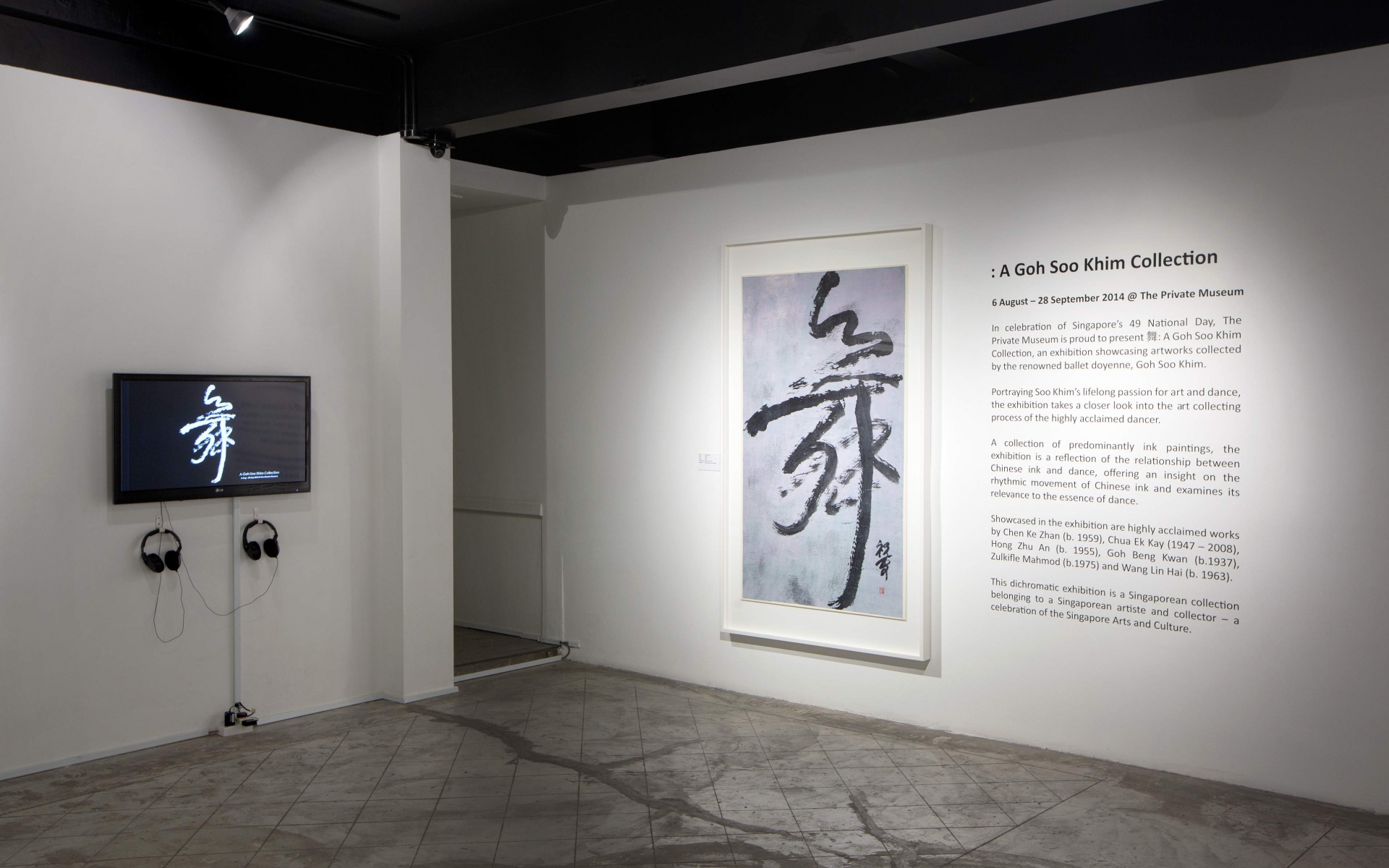 The late Chua Ek Kay was a China-born Singaporean artist who practised contemporary Chinese ink paintings and is known for his combination of both Eastern and Western art theories and techniques in his works. He also engaged in art lecturing as well as curatorship and poetry. In 1991, Chua won the first prize in the inaugural UOB (United Overseas Bank) Painting of the Year Competition. His major exhibitions include a solo exhibition at the Shanghai Art Museum, China in 2005. He was also a Cultural Medallion recipient in 1999. Notable exhibitions include Recent Works by Chua Ek Kay in 1995 at the University of Western Sydney, Australia and Power and Poetry, Monuments and Meditations in Chinese Ink Painting at the Singapore Art Museum in 1999.

Born in Medan, Goh Beng Kwan is a full-time Singaporean contemporary artist. Most of Goh’s works feature a variety of materials assembled in abstract painting-collages that create engaging impressions. In his early years, he was under the tutelage of pioneer Singapore artists Chen Wen Hsi and Cheong Soo Pieng, where he was trained in Chinese ink and oil painting. His works have been exhibited in Asia, Southeast Asia, Europe and the United States. He won the first prize in the inaugural UOB (United Overseas Bank) Painting of the Year Competition in 1982 and went on to receive the Cultural Medallion Award in 1989 for his contributions to the development of visual arts in Singapore. Goh’s works are widely collected by public boards and private collectors, which includes the Australian High Commission, the Bank of America and the Singapore Art Museum.

Henri Chen Ke Zhan is an established full-time Singaporean artist in the field of contemporary Chinese painting. A mixture of Chinese and Western art, Chen’s works are collected by museums worldwide, which include the Honolulu Academy of Arts Museum, USA and the Krasnoyarsk V.I. Surikov Arts Museum in Russia. He has had numerous solo and group exhibitions since 1978 exhibiting works in Asia, Southeast Asia, Europe and the United States. In 1999, he was awarded the Patron of the Arts Awardby then Ministry of Information and the Arts in Singapore. Chen is one of the selected artists to represent Singapore in its inaugural entry to the prestigious Venice Biennalein 2001.

Hong Zhu An is a Singaporean artist originally from Shanghai, China. Hong has been living in Singapore for the past 20 years and has a background in both traditional Chinese and Western art forms. His accolades include the ‘UOB Painting of the Year Award’ (1994) and ‘The Best 100, The National Ink Painting Competition, China’ (1988). Hong’s works are also part of collections of major institutions such as the Asian Art Museum of San Francisco, Princeton University Art Museum, and Singapore Art Museum. Hong has also exhibited internationally in numerous solo and group exhibitions which includes ‘The Second Beijing International Art Biennale’ in 2005 in China and ‘Hong Zhu An – Exhibition’, at the National Art Museum in Shanghai, China in 1987.

Zulkifle Mahmod (ZUL) is a Singaporean multidisciplinary artist, working with sculpture, installation and drawing. He is at the forefront of a generation of sound-media artists in Singapore’s contemporary art development. Zulkifle’s notable initiatives include an industrial-sound inspired soundtrack in conjunction with an Antoni Tapies exhibition at the Singapore Art Museum and the first 24hr sound art festival, ‘Una Voce, 2005’ at The Substation. Zulkifle was also the first sound artist to represent Singapore at the 52nd Venice Biennale in 2007, Italy.

The 68th generation descendant of Wang Xi Zhi, Chinese calligrapher sage of the Jin Dynasty, Wang Lin Hai is a China-born artist specializing in Chinese ink. Without focusing on specific themes or subjects, Wang is able to create works with no constraints. With an artistic career spanning more than 30 years, Wang’s artworks are renowned and collected throughout the world.